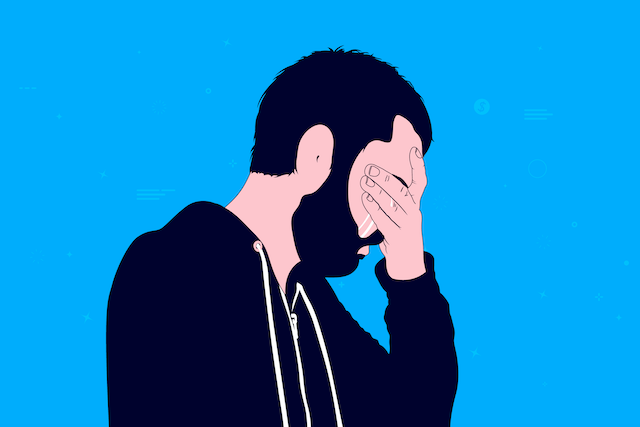 Over the years I’ve built myself a bit of a reputation as “the emotional one.”

I was always the first to cry at weddings, and that included my own. At that one I barely stopped throughout the ceremony! And as soon as I’m beyond the half-way point of any good holiday, it’s inevitable that a pretty epic sob is waiting in the wings.

At this point I should probably mention that I’m a forty-three-year-old male. I also live in the UK, a country that’s proud of its “Bulldog spirit” and “stiff upper lip.” What this really means is that we’re a country where many people are uncomfortable with their own emotions, and shockingly bad at processing them.

That brings me on to the point of this post—and it’s a happy post. I’m delighted to report that in the past few years I’ve come to see the true value in being able to cry, and being unashamed to do so.

This doesn’t mean I’m somebody who has frequent public meltdowns that make people uncomfortable! In fact, it’s quite the opposite. I’ve reached the point where I’ve learned to recognize my own internal pressure valve. I know when it needs releasing, and know how to do it in a private, dignified, and healthy way.

Human beings are the only animals with the ability to cry. It clearly has a purpose, and it doesn’t take much research to discover it has serious benefits, both mentally and physiologically. Crying is thought to reduces stress hormones and relax the nervous system.

There are alternatives to crying, and we see them all the time: unhealthy behaviors, addictions, outbursts of anger and violence, and patterns of arguments and disharmony.

That takes me back to the whole “stiff upper lip” thing. Emotions have to come out somewhere, and in my experience it’s the people who are fixated on being “strong” and “manly” who live lives cluttered with arguments and hangovers.

On balance, I’d much rather have the ability to cry, and no shame in doing so. Recently, I feel I’ve learned to take it further than that to the point that I can use crying as an extremely useful tool in my mental health armoury.

So, what got me to that point? The answer is simple: fatherhood.

My oldest son has just turned seven years old. And he’s very much like me. It’s a much-misused word, but he’s a “sensitive” lad. He’s hugely empathetic, and a wonderful gentle soul. He’s also very sentimental and—again like me—as likely to be touched by joy as by sadness.

Like everyone else in the world, we’ve had a challenging time since the pandemic began. One of the hardest parts has been navigating the children through it. This means dealing with their lockdown loneliness, but also constantly working out what to tell them so they’re as protected as possible without us insulting their intelligence.

Another part of this is recognizing when it’s all getting a bit much for them.

I can pretty accurately predict when a “meltdown” is incoming for my son. And I always ensure that I’m there ready for him when he wants to let the tears out. I encourage him to take as long as he needs. I cringe when I see parents saying, “that’s enough now,” or worse.

While I’ve been teaching him this, I’ve been learning myself. Just as I’ve learned to predict when he may soon need to “let it all out,” I’ve become much more attuned to when I need to too.

I have some mental health issues. Anxiety is the main one, with a generous scattering of OCD and some periodic depression as the cherries on top.

One thing that indicates my mental health is in trouble is when I can’t cry. Depression is often misunderstood. For me, when it’s at its worst, it manifests as being emotionally empty and numb.

In fact, “the big cry” often marks the turning point in a spell of depression. It means I’ve started to feel again. I’ve learned the pattern over many years, and it’s now got to the point where I can say “I need to cry.”

And that’s a really powerful thing. I know what I need to do, so that empowers me to consciously try to do it nowadays.

As we’ve already established, crying can release stress hormones and calm the nervous system. Who wouldn’t want to do that, especially during a spell of poor mental health?

The trouble is, far too many people are conditioned to feel ashamed of showing emotion. But it’s not like I phone all my mates and say, “I’ve been feeling a bit low, so I’m setting aside an hour today to go in the bedroom with a bunch of sad songs and some tissues.”

This last happened just a few days ago, and I did tell my wife my intentions. That in itself involved a little embarrassment and vulnerability. But when I re-emerged a little later, she said that I looked like a different person—with a bounce in my step and colour back in my cheeks.

That’s why I’ve written this. It is deeply personal, because nobody’s ever proud of having a good cry. I can’t help wondering whether that should change.

I am proud that my children don’t have to live in a house where there are needless arguments. A home where we process emotions in a healthy way—a way that humans alone have access to.

So get that “crying tunes” playlist ready. Learn which old photos set you off, or which films are certain to “hit you in the feels.” And don’t be afraid to tuck yourself away for a while and use the power of emotion to enhance your mental health.

To be clear, this isn’t a weapon I have to deploy frequently or publicly, but it’s one I’ve come to love having at my disposal. It’s there for you too, so don’t be scared or embarrassed to make use of it. The alternatives may be more popular with the “stiff upper lip” crowd, but they don’t benefit them, or the people around them.

Ben Taylor is a UK-based day, IT consultant, freelance writer and blogger. He runs a self-improvement site at TinyLittleChanges.com, and provides advice to home workers at HomeWorkingClub.com.

The post How My Son Taught Me That Crying Can Boost My Mental Health appeared first on Tiny Buddha.